How we raised our first 500k

After a year of learning, building, and selling, my cofounder and I decided to raise our first round of funding for our startup, Pearl.

Although we were successful in raising, our venture didn't work out. Pearl doesn't exist anymore... well, sort of... we pivoted severely into a totally different thing. Nonetheless, the lessons learned during this fundraise were super helpful for me as a founder, and will likely be helpful to other new founders as well.

First, let me provide some background context on who we are and what we were building. For better or worse, the fundraising experience is heavily colored by these details. If your context is entirely different, don't read this. It won't be helpful (this is a disclaimer I wish I saw more often when I was looking for advice online...)

My cofounder, Alex, and I both went to UCLA. We're both male and white. He's in his early 20s, I'm in my mid 20s. Before Pearl, I had built two other businesses: a nonprofit music festival and an ecommerce store. They weren't massive successes , but they netted me enough income to be my full-time focus.

Alex's prior experience included some developer internships at NIST, T Rowe Price, and Amazon. Neither of us had particularly useful personal networks for raising money.

We were building a recruiting technology called Pearl. It was an AI personal career agent over text message that helps find you a new job. We noticed that a huge portion of the talent market (~57%) were open to a new job, but not willing to actively search for one because, well... job hunting sucks. So we set out to make job hunting so easy that anyone could do it. In doing so, our goal became to build the world's passive talent network.

Our approach leveraged cutting-edge conversational AI, which gives us a "cool factor" but it's being applied in the recruiting space, which has historically been mired with difficult outcomes and is generally considered to be unsexy. 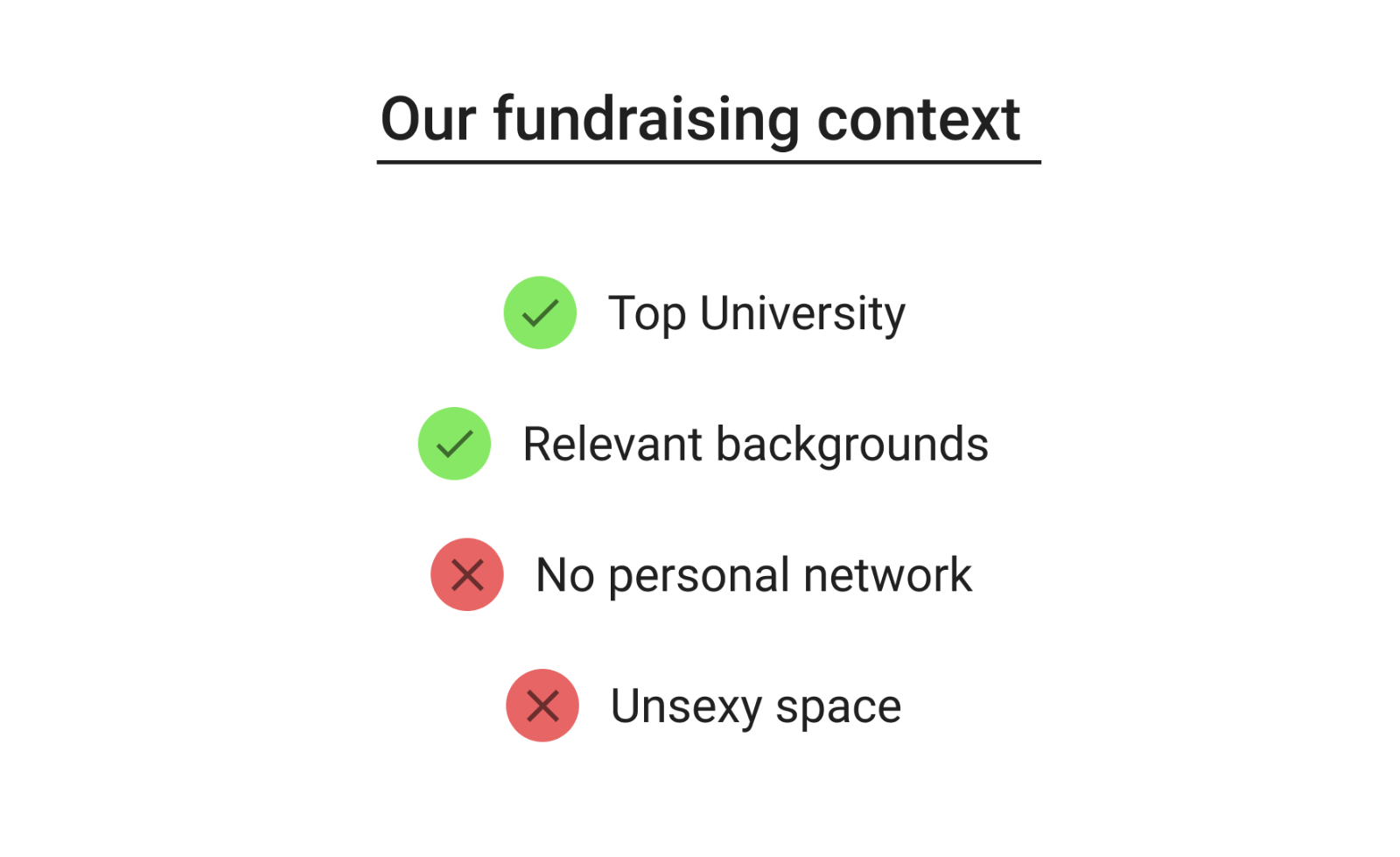 With this context in mind, let's dive in.

When we kicked things off, our priority was to build momentum. We needed to go from zero to one. The size of the check wasn't important.

To facilitate smaller investments, we opened up a Roll Up Vehicle (RUV) on Angellist, which is basically a syndicate that founders can create for the sole purpose of collecting investment money into their startup (it's called a Roll Up Vehicle because when its closed, all the money is "rolled up" and given to you as a single lump payment, then enters your cap table as a single line).

With our RUV in place, we decided to accept checks as small as $1k. Now we needed to go find ourselves some accredited investors who were willing to take a small bet on us. Luckily for us, our clientele at Pearl consisted mostly of venture-backed founders who were accredited. So we started firing off emails... 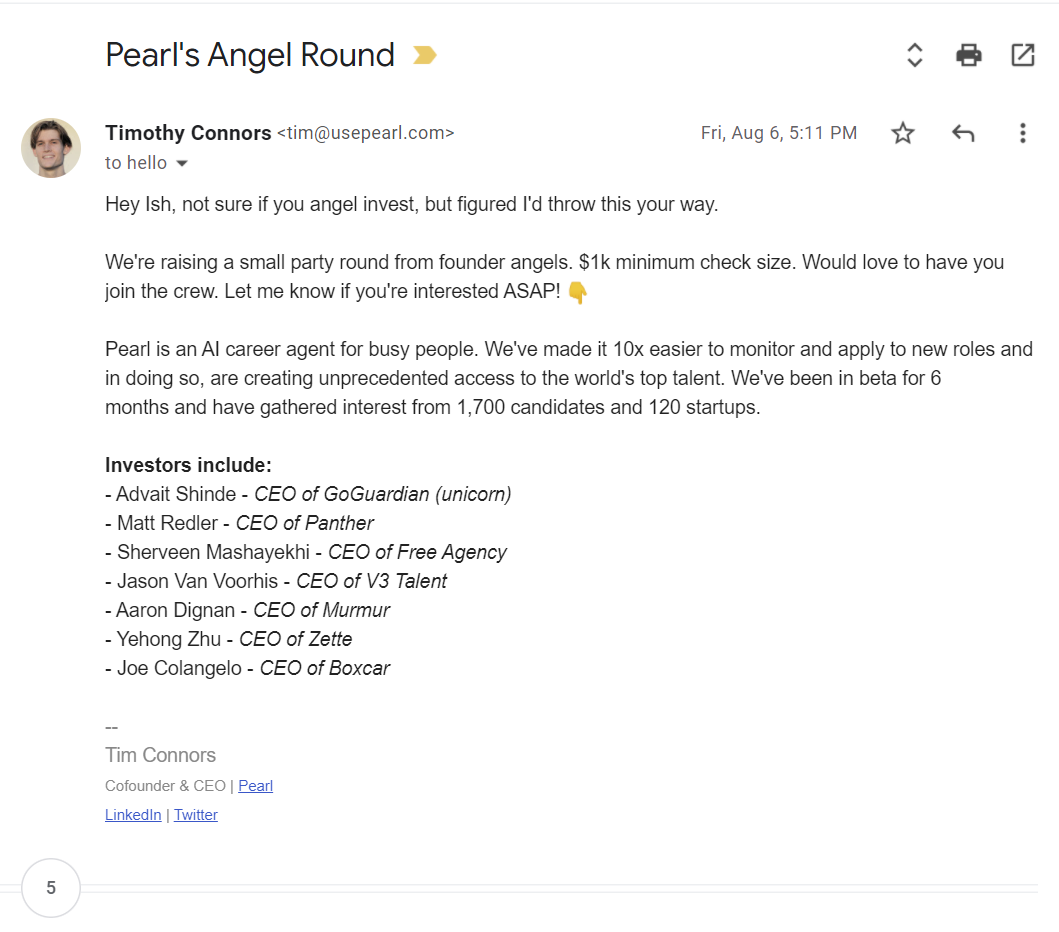 With each new check, we added a name to the list of investors. Notice how it didn't really matter what the size of each investment was - those details were not shared, nor asked for. What mattered was that they were an investor.

We started this first step with a list of about 50 names who we felt might want to participate. Ultimately about 10 out of that 50 decided to invest a small check.

When someone decided to back us, the next step was to try to expand into their network of investors. Asking them to give you names of people to talk with usually does not work. Instead, present them a list of people you want to speak with.

To do this, I went to LinkedIn, typed in words like "investor" or "angel", and then filtered by a mutual connection with the given investor.

After collecting a handful of promising mutuals, I would fire off individual emails to the investor asking for an intro to each person. This way, the investor could simply forward the email to the person I was seeking to reach. 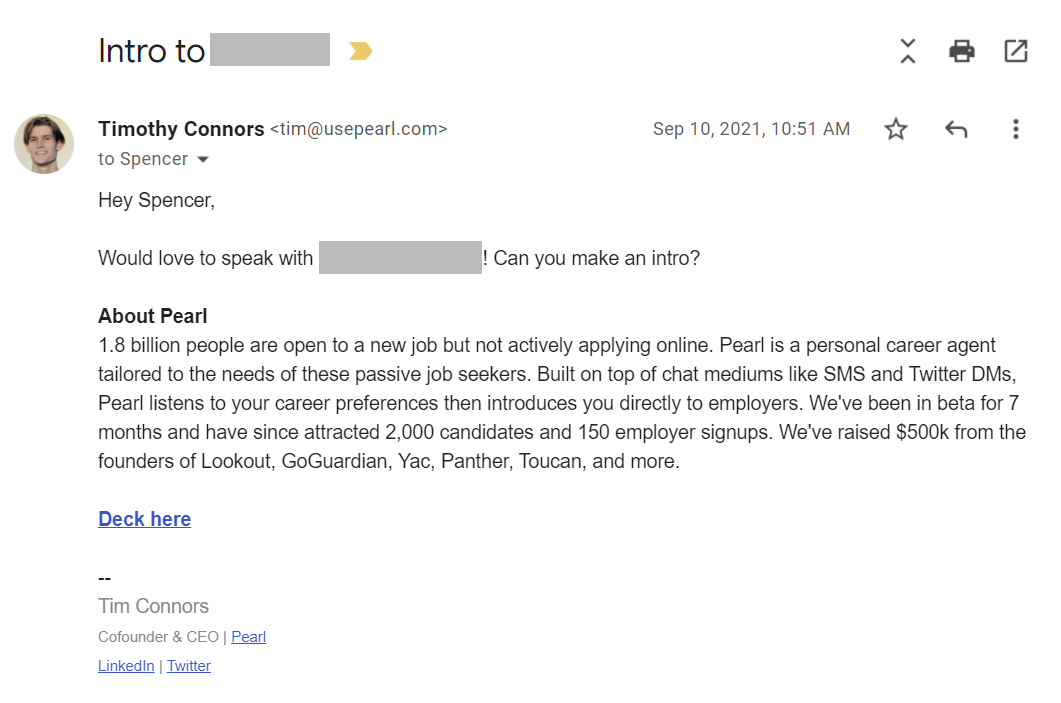 Working through this 2nd degree network added an additional 10 investors to our round, some of which invested 10kor20k, which brought our total amount raised to about $80k. We were off to a great start.

Next it was time to go cold.

For this phase, I compiled a list of angel investors who were connected to me in some small way. Maybe they also went to UCLA, maybe we had a few loose mutuals on linkedin, etc.

One of the best strategies at this stage was sifting through folks who follow me on Twitter (I had spent several months growing an audience of about 3k followers). Flocknet was a useful tool for this - it allows you to search your follower list by keywords.

I'd reach out with a few words about what we were up to, and info about the round so far. In total I reached out to about 50 people this way. Naturally, the conversion rate was a lot lower with this group, but it was worth my while. We ended up getting to about $100k after this phase. 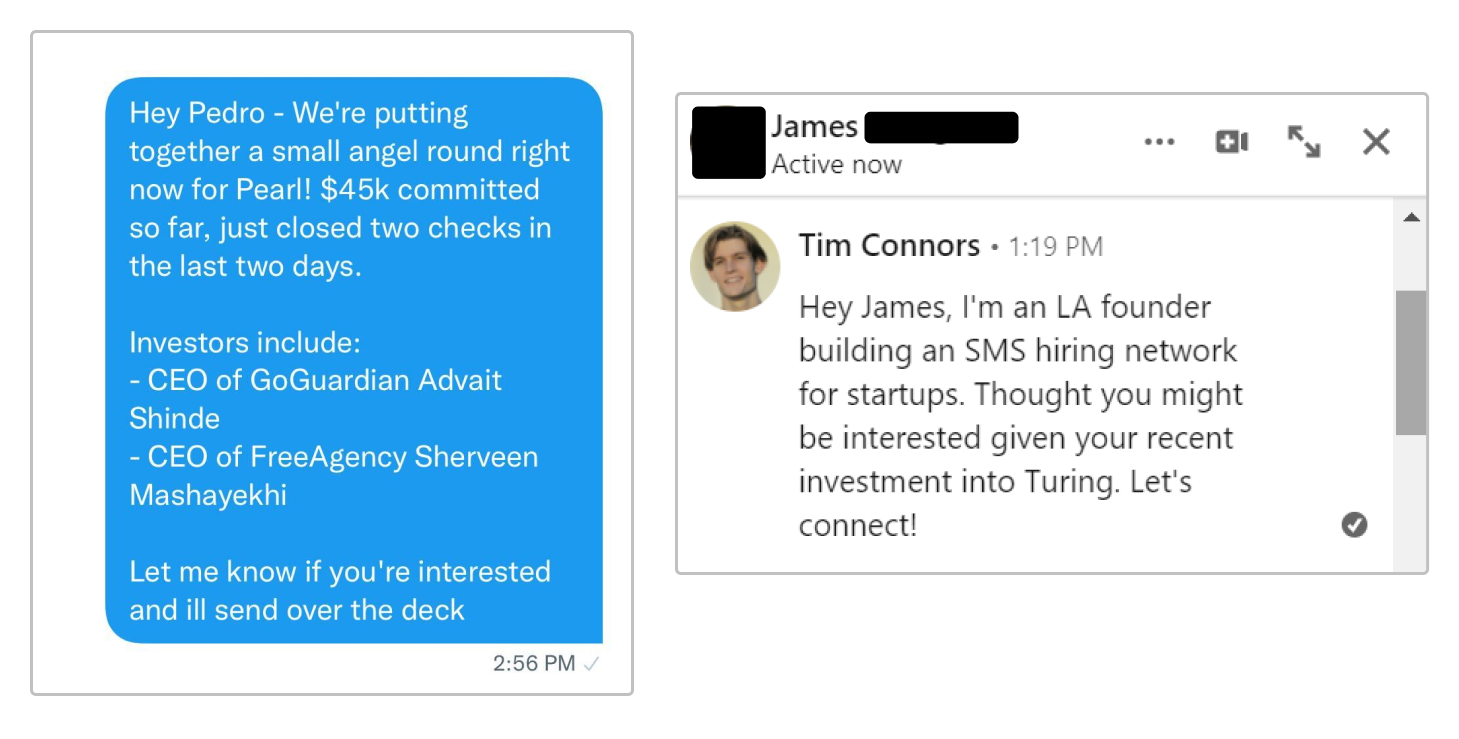 Now it was time for the big leagues: pitching venture funds.

I started by asking our network of angel investors who we should talk with. To supplement that strategy, I also browsed giant lists of pre-seed funds, then checked out their portfolios to see if they had made investments in companies who were similar to us. This would give me an idea if they had an appetite for recruiting tech (an unfortunately rare attribute). Here's some lists I used:

After compiling a list of about 25 target funds, I ordered them in terms of priority, lowest to highest. I knew my pitch would get better over time, so I wanted to save the top tier funds for the end.

Then I started going through the list, trying to find an introduction to someone at each firm. This process was, by far, the most time consuming process of our entire fundraising journey. But it was worth it because, in my opinion, approaching a VC firm without an intro is a waste of time.

There are so many deals going around that investors are forced to use heuristics to prioritize their time. The most common heuristic used is whether or not the deal is coming from a trusted source.

Brief tangent: Finding all these intros would have been impossible for me had I not spent the past 6 months networking with countless founders and high level operators. When we started Pearl, I knew my network sucked, so I spent a lot of time juicing it up. I'd send my calendar link to anyone who popped out to me online saying "hey, we're both doing cool things, let's talk shop!"

After firing off hundreds of intro requests, my schedule was jam packed. I spent the following two weeks taking 4 of 5 pitch meetings each day.

All told, I pitched probably 30 venture funds. About 10 of them ended up being a poor fit for us - they were specialized in a different space or stage, or we just didn't like their vibe. Out of the remaining 20, we did follow up calls and diligence with five. Two ultimately invested.

If we had sought to raise more capital, we would have added a lot more firms to the top of that funnel. From what I've heard, 30 is a pretty low number of pitches to raise a pre-seed round. But it was all we needed for the $500k goal. 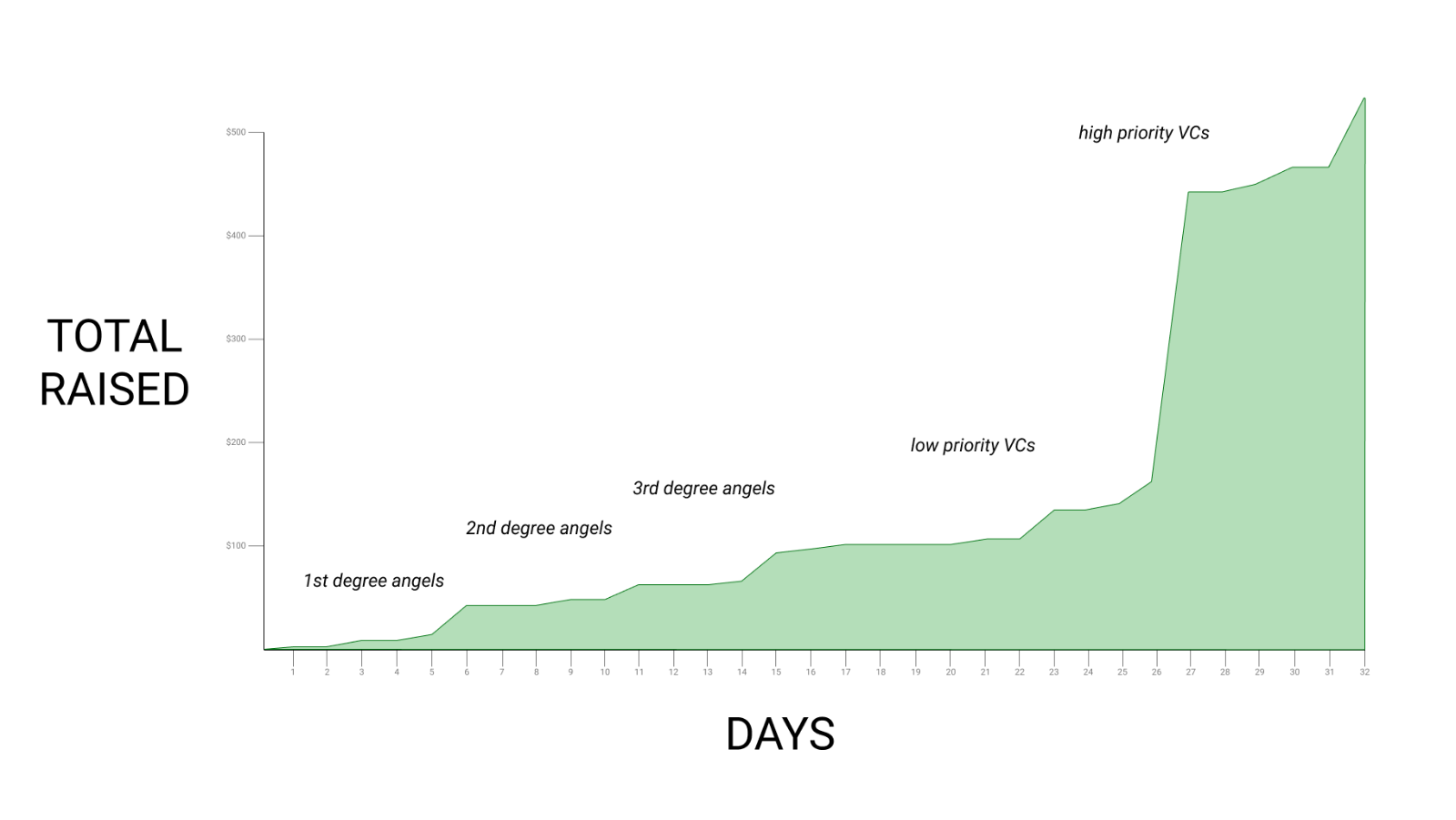 This process taught us a ton about fundraising. For any founders looking to learn more from our experience, feel free to reach out to me on twitter. My takeaways are as follows:

Thanks to everyone who participated in this round! Here's the list of investors who gave us permission to share their name: